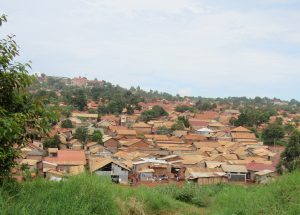 As of today, it has been one week since we have arrived in Kampala, Uganda. It has been an eye-opening trip, and a wonderful experience thus far. Our days have been packed with various activities such as biking in the Kampala countryside, canoeing on Lake Victoria, attending a traditional cultural dance performance, and visiting a local market. The activity that has impacted me the most thus far is our visit to the slums of Kampala. The drive to the slums is about thirty minutes from our hotel. As we turned off the main road to make our way down into the neighborhood, I immediately noticed how the hustle and bustle of the city transformed into a quiet calm. The brown dirt “roads” were bumpy and uneven, and the houses began to look more like debilitated shacks. We made our way to a primary school which is supported in part by the Twekembe Slum Project, a non-profit organization which promotes the welfare improvement of Kampala slum residents. Children whose parents are unable to afford the fees, uniforms, and transportation that is required of traditional schools can attend this school for free. They are then able to stay in the school up until it is time for secondary school, which begins around age fourteen or fifteen. Unfortunately, there is no secondary school that provides free education like this primary school, so children in these slums often end their educational advancement when they are finished with primary.

One of the future goals of the school is to offer vocational lessons so that students are able to develop some type of technical skill before leaving primary school.  This will provide them the opportunity to more easily obtain employment should they be unable to complete their education.

As we got out of the car, we could see children laughing and playing with an old wheel barrow and dirt mounds. There were no toys in the yard and the few bits of playground equipment that was there were old, rusted, and basically unusable. Despite the lack of equipment, the kids were making good use of the few objects that were available. Next, we were introduced to the school director and teacher, followed by a short tour of the school. The classrooms were merely single rooms with dirt floors, a chalk board, some old wooden desks, and some posters that the teachers placed on the wall.  The kids giggled and laughed as we went into each room, seemingly excited to have visitors. Before we left we handed out books to the children, which turned out to be a little chaotic! Kids were saying “Me, me me” over and over, pushing their way to the front to get a chance to grab a book. Luckily, we had more than enough books for each child to receive at least one. I noticed several kids negotiating with one another to try and work out book trades! Dr. Swahn mentioned that this is probably the first time they have gotten a book in a very long time, if ever. It really made me happy to see how excited the children were regarding our gifts!

Before we left for the day we visited one more school located in another slum area. The poverty within this school and the surrounding neighborhood is on a level in which I have never before seen or experienced. Despite these surroundings, the children seem genuinely happy, and we were even greeted with a song! Their smiles were contagious, and one couldn’t help but give them a big smile back! 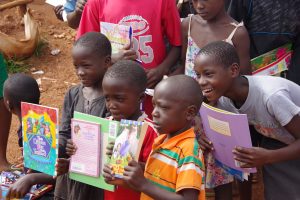 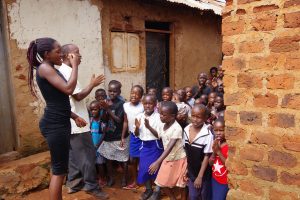 This school is run by Mr. Brown, a man who volunteers his time and energy to these children with nothing expected in return. I was so impressed by the dedication and passion he has for the school, and the fact that he is doing it with the help of only one other volunteer teacher. The room, which we would describe as a shack, that is used for classes is very small, cramped, and narrow. Mr. Brown says that he is unable to fit all of his students into the classroom at once, and that they are in dire need of a bigger space and more desks. It was so hard for me to imagine how a class of any size could effectively fit in such a small area. As we made our way back to the car I realized that I had a new pack of pens in my purse. I handed it to Mr. Brown and he was so grateful, you would have thought I just handed him the keys to a new car! This whole day has made me appreciate every privilege that I have, even the fact that it means nothing to me to go down the street and buy a pack of pens from Target. The fact that even a pack of pens could be considered a great gift, really brings things into prospective. This has been a day that has made a personal impression that will last for a very, very, long time.