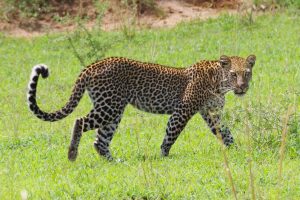 Over the weekend we were fortunate enough to travel to Murchison Falls National Park in Uganda, a 6 hour drive north of Kampala. We stayed at the Chobe Lodge, a wonderful hotel located on the banks of the River Nile. It wasn’t uncommon to hear the grunts and calls of hippos while we took a meal on the terrace overlooking the river.

On Saturday, we were joined by a local AK-47 toting ranger named Henry. He was an experienced guide who led us on a photo safari through the wildlife reserve, pointing out many interesting animals we encountered including numerous birds, elephants, warthogs, various species of antelope, and a rather shocking number of giraffes.

Throughout our time in the park, we were hoping to see either lions or leopards, with the leopard being a much rarer sight, especially during the day. During our travel through the park, Henry kept an eye out for what he called “leopard trees.” Leopards tend to favor trees with wide, low branches. Leopards are solitary hunters and after a successful kill, they drag their catch up into the branches of a tree to be eaten at the leopard’s leisure.

It was late morning when Henry spotted a dead antelope dangling from the branches of a tree. He instantly recognized it as a leopard’s kill. We searched the area but the predator was nowhere in sight, so we continued our trip through the park.

We returned a few hours later at the perfect moment. The leopard was climbing down the trunk of the tree Henry had scouted earlier! Initially it hid in some brambles at the base of the tree, eyeing us wearily. A moment later it began walking slowly across the clearing near the tree, towards nearby brush. The leopard continued to keep an eye on us as it strolled towards cover. It was such a beautiful, powerful creature and we were very fortunate to see it in the wild. It was only thanks to Henry’s keen eye and years of experience that we had such an amazing opportunity.